Yes, Please. No Thank You.
Your Contact Form has been sent successfully. Close this notice.
1 year ago · by HealthInsurance4Everyone · Comments Off on Top Editors Resign Amid Backlash Over Bias Reporting of Protests

Top Editors Resign Amid Backlash Over Bias Reporting of Protests 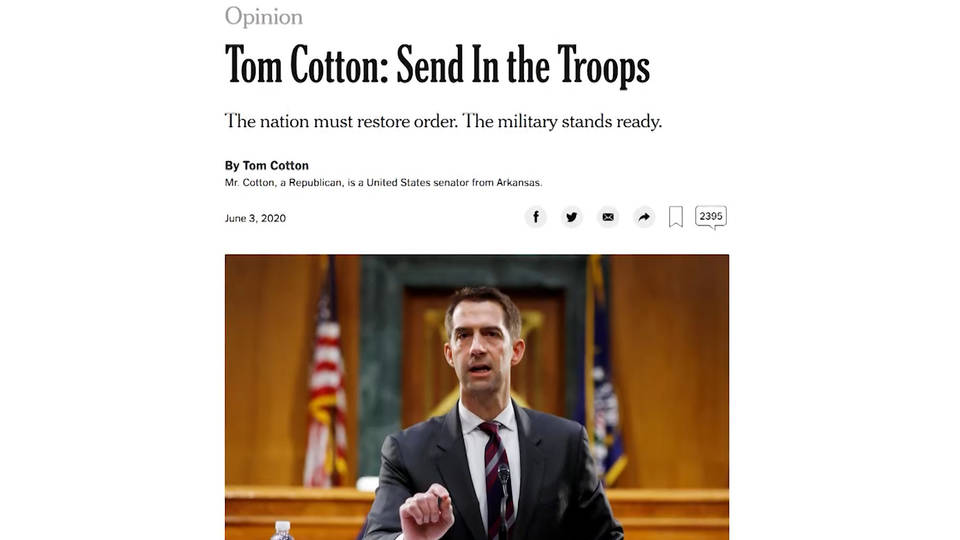 In the opinion piece, Sen. Tom Cotton, advocated for deploying the military for riots. The senator described looting in New York City as “carnivals for the thrill-seeking rich as well as other criminal elements,” and wrote that leftist ntifa movement had infiltrated protest marches despite an earlier Times article that reported Antifa involvement in the protests as misinformation.  The column immediately drew backlash, with dozens of Times journalists voicing their opposition, tweeting the headline, caption and a form of the phrase “Running this puts Black @NYTimes staff in danger.”

Both Sulzberger and Bennet first defended the decision to run the column but the Times reversed itself and said the column had not met editorial standards. The Times reported that Bennet said in a meeting with staff members that he had not read the essay before it was published. And the paper added an editor’s note to the top of the original column.  “We’ve examined the piece and the process leading up to its publication,” said Eileen Murphy, a Times spokeswoman. “This review made clear that a rushed editorial process led to the publication of an op-ed that did not meet our standards. As a result, we’re planning to examine both short-term and long-term changes, to include expanding our fact-checking operation and reducing the number of op-eds we publish.”

Meanwhile, Stan Wischnowski,  the top editor of The Philadelphia Inquirer, has also resigned days after the paper published a piece titled “Buildings Matter, Too.”  The newsroom vet resigned after backlash from staff over that headline on a story that said “there could be a gaping hole in the heart of Philadelphia” amid protests over the killing of George Floyd.

Dozens of journalists signed an open letter to their editors explaining their decision to call out “sick and tired,” CNN reported. “They said they have spent ‘months and years’ trying to gain the public’s trust only to have it “eroded in an instant by careless, unempathetic decisions.”  The paper issued an apology the next day.  But it wasn’t just the article that played a role in Wischnowski’s resignation.  Wischnowski and other editors had scheduled a staffwide Zoom meeting to discuss race at The Inquirer and the pressures in particular faced by journalists of color before the article was published.

The Zoom session started off with Wischnowski telling staffers about the strides made in diversifying its 213-member newsroom but the session turned intense and emotional.  Some journalists could be seen in tears in their Zoom frames. Critics, black and white, denounced the pace of change at the paper, sharply criticizing both coverage and the racial and gender mix of the staff. Several journalists pointed out that the newspaper could muster only one male African American reporter to cover the protests and police response convulsing a city that is majority minority.  Hours after the wrenching Zoom session, about 50 journalists of color signed an open letter calling for faster changes at the paper. The following day, most of the minority staff took the day off from work in protest.