Yes, Please. No Thank You.
Your Contact Form has been sent successfully. Close this notice.
2 years ago · by Health Insurance 4 Everyone · Comments Off on 9/11 Victims Compensation Fund Passes A Day After Jon Stewart’s Testimony 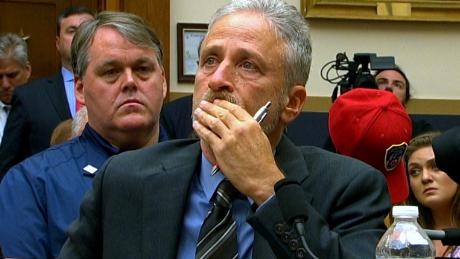 The House Judiciary Committee unanimously passed a bill which would permanently reauthorize the 9/11 Victim Compensation Fund, the day after comedian Jon Stewart gave impassioned testimony in support of the bill.  The bill will now go to the floor for a full vote in the House of Representatives, where it is likely to pass.  Congress passed the James Zadroga 9/11 Health and Compensation Act in 2010 and the act was reauthorized in 2015 for 90 years. But a portion of the law — the Victim Compensation Fund — was only funded for five years, through the end of 2020.

The fund aimed to provide necessary financial support for the thousands who suffered serious medical issues, including a spate of cancer diagnoses, after the 2001 attacks.  New York City health officials say the number of people who have been diagnosed with 9/11-linked cancers has tripled.  Thousands of first responders rushed to the scene of the attacks and in doing so, exposed themselves to toxic debris in the air, including asbestos, lead, and pulverized concrete, which causes silicosis.

Nearly 5,500 first responders and local residents have now been diagnosed with cancers linked to the toxic smoke and dust of 9/11.  As of September 2018, 2,000 deaths were attributed to 9/11 related illnesses. By the end of last year, many estimate that more people will have died from toxic exposures than were actually killed in the attack.

The spike in claims has left the VCF at risk of a massive funding shortfall. As a result, future payouts to 9/11 victims and their families may be cut by as much as 70%.  The bill that passed the judiciary committee on Wednesday aims to make the VCF permanent and grant additional funding to the bill. A specific amount has not yet been allocated.

At an emotional congressional hearing, Stewart, who has been a longtime advocate for the fund, blasted lawmakers for their inaction ahead of a vote on renewing healthcare funding for 9/11 responders.  During his testimony, Stewart became upset several times as he appealed to Congress. “Behind me, a filled room of 9/11 first responders. And in front of me, a nearly empty Congress. Sick and dying, they brought themselves down here to speak to no one. Shameful. It’s an embarrassment to the country, and it is a stain on this institution. And you should be ashamed of yourselves, for those that aren’t here. But you won’t be, because accountability doesn’t appear to be something that occurs in this chamber.”

Stewart made several points during his passionate speech.  “The official FDNY response time to 9/11 was five seconds. ​Five seconds. That’s how long it took for FDNY, for NYPD, for Port Authority, EMS to respond to an urgent need from the public. ​Five seconds. Hundreds died in an instant.  Thousands more poured in to continue to fight for their brothers and sisters.”  He went on to point out that as lawmakers had at first, denied the health issues were caused by the debri left behind the attack and when they no longer could deny it then then said it was a New York issue.    “More of these men and women are going to get sick and they are going to die. And I am awfully tired of hearing that it’s a 9/11 New York issue. Al Qaeda didn’t shout “Death to Tribeca.” They attacked America ​and these men and women and their response to it is what brought our country back. It’s what gave a reeling nation a solid foundation to stand back upon. To remind us of why this country is great, of why this country is worth fighting for. And you are ignoring them.”