Yes, Please. No Thank You.
Your Contact Form has been sent successfully. Close this notice.
1 year ago · by Health Insurance 4 Everyone · Comments Off on Thirty-Four Killed in Labor Day Boat Fire 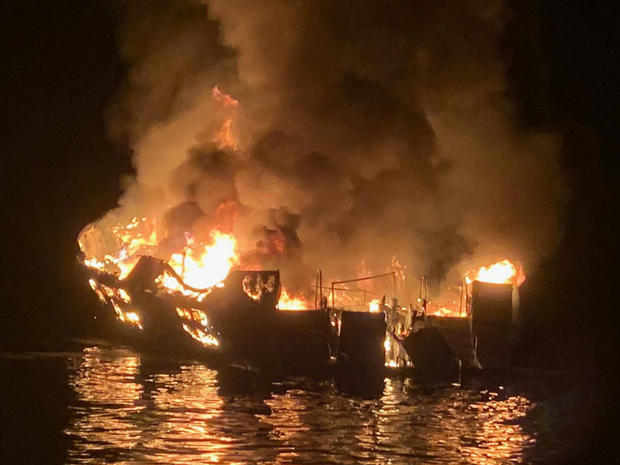 The U.S. Coast Guard has recovered all but one body after a commercial diving boat named the Conception, caught fire in the early hours of Monday morning off the coast of Santa Cruz Island in Southern California. The only survivors were five crew members of the 75-foot vessel who were sleeping on or above deck.  All 33 passengers and one crew member sleeping below deck at the time of the fire were killed in horrific disaster.  Authorities have yet to determine the cause of the fire.

The boat and company, Truth Aquatics Inc., are well-known in the tight-knit Southern California diving community, which is now reeling from the horrific maritime tragedy that killed teenagers, families, veteran divers, and one crew member, who were wrapping up a three-day scuba diving trip.  Divers were inspecting the ship’s wreckage with plans to raise it from the ocean floor, but that process may be complicated by forecast high winds in the coming days.

The surviving crew members told a harrowing story of their frantic attempts to save the passengers trapped below deck in a bunk room already engulfed in flames.  One member of the crew told of hearing a noise from his bunk on the wheelhouse deck of the Conception and that when he opened the door of the wheelhouse, he saw flames erupting from the galley area but never heard smoke alarms.  He told investigators he tried to get down a ladder but flames had engulfed the ladder.

Scrambling, the other crew members jumped from the bridge of the boat to the main deck. One person broke their leg doing so. They then rushed to the galley’s double doors to try and reach the passengers below, but the fire was already too intense.

At around 3:15 a.m., the captain made a frantic mayday call to authorities, telling them that the boat was engulfed, 33 people couldn’t escape, and “there’s no escape hatch for any of the people on board.”  At that point, due to heat, flames, and smoke, the crew had to jump from the boat.  Two crew members swam to the back of the Conception to get the inflatable skiff, then collected the others and made it to a nearby fishing boat, the Grape Escape.

Shirley Hansen, owner of the Grape Escape, said that she and her husband awoke at 3:30 a.m. to “horrific pounding” and a group of distraught, wet men, some injured and just in their underwear.  Once on the Hansen’s boat, the men tried to call 911 for rescue and two crew members then took the dinghy boat back to the Conception to try and rescue any survivors but there were none.  The Hansen’s said you could hear explosions from the engulfed diving boat every couple of minutes.

Officials have been looking at the dive boat’s maintenance and inspection records, which the Coast Guard said were up to date, and trying to understand if the 34 victims who had been sleeping in rows of narrow bunks even had a chance to escape.  Officials are using advanced DNA technology to identify the victims.  None of the names of the dead, who ranged in age from 17 to 60, have been publicly released by authorities but friends and family have confirmed who was on the boat.  Among the victims were a family of five, a teacher and his daughter, and a diving instructor and marine biologist.