Yes, Please. No Thank You.
Your Contact Form has been sent successfully. Close this notice.
2 months ago · by HealthInsurance4Everyone · Comments Off on Minneapolis Investigating Unnamed Umbrella Man 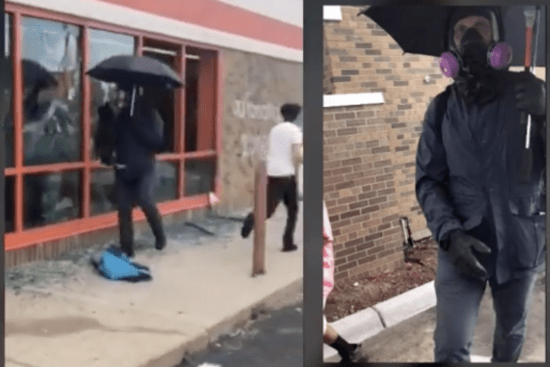 Minneapolis police have issued an arrest warrant for a suspect known as “Umbrella Man” who was filmed smashing the windows of an auto parts dealership on May 27, two days after the police killing of George Floyd.  Video of the “Umbrella Man” went viral after protesters in Minneapolis confronted and filmed him while he was in the act of smashing several windows of an AutoZone store.  Investigators say the man is a white supremacist who sought to provoke violence against protesters.  The term “Umbrella Man” was coined on social media as people guessed at his identity, with some protesters speculating he was actually a member of the police force.

According to a search warrant, the man is associated with the “Aryan Cowboys,” which the Anti-Defamation League lists as a White supremacist prison and street gang. The warrant does not label them as a White supremacist group, but describes them as a “known prison gang out of Minnesota and Kentucky.”  A Minneapolis arson investigator wrote in the search warrant affidavit that the man also spray painted the words “free sh*t for everyone zone” on the doors of the AutoZone. Not long after he smashed in the windows, looting began, and a bit later the AutoZone was set on fire, the affidavit said.

“This was the first fire that set off a string of fires and looting throughout the precinct and the rest of the city,” Sgt. Erika Christensen, wrote in the affidavit.  “Until the actions of the person your affiant has been calling ‘Umbrella Man,’ the protests had been relatively peaceful. The actions of this person created an atmosphere of hostility and tension. Your affiant believes that this individual’s sole aim was to incite violence.”

Police identified the 32-year-old suspect through a tip last week but the suspect has not been named. Minneapolis police spokesman John Elder told the Associated Press he could not confirm the name of the person involved, but said the investigation remains open and active.  The tipster told the investigator that the man was a member of the Hells Angels biker gang who “wanted to sow discord and racial unrest by breaking out the windows and writing what he did on the double red doors.”  Police matched him to photos a Muslim woman took when she was harassed during an encounter with the Aryan Cowboy Brotherhood, while eating burgers with her young daughter in Stillwater in June.

The riots spread to other parts of Minneapolis and led to Minneapolis’ 3rd Precinct burning down, and according to Minnesota Gov. Tim Walz, resulted in $500 million in property damage.  At least two people died — one a man who was fatally shot at a Minneapolis pawnshop and another man whose burned body was found in the ruins of another pawnshop.

Protests against police brutality and systemic racism continue in cities across the country in the wake of Floyd’s death.  The Black Lives Matter movement has drawn tens of millions into the streets to participate in protests taking place every day since May.  The protests have been plagued with violence from the start.  They continue to push for police reform and an end to systemic inequalities around race.  It has led to radical reform in recent months in many states and the faces of those they continue to seek justice for continue to change as more police shootings occur.