Yes, Please. No Thank You.
Your Contact Form has been sent successfully. Close this notice.
2 months ago · by HealthInsurance4Everyone · Comments Off on Boise Protestors Storm Capitol Building 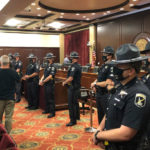 The first day of Idaho’s special legislative session erupted into chaos as dozens of unmasked protesters, many of them armed, shoving their way past state troopers to pack the gallery overlooking the state’s House of Representatives. The confrontation as the protestors pushed past state troopers, resulted in the shattering of a glass door. The group was led by Ammon Bundy, who led an armed standoff against federal agents in Oregon in the 2016 occupation of the Malheur National Wildlife Refuge.
Protestors then flooded the halls of the building outside the doors of a special session to discuss health measures and reopening procedures amid the pandemic. The shouted and chanted outside the doors until House Speaker Scott Bedke relented and allowed protesters to fill every seat despite the gallery area being restricted with limited seating to enforce social distancing. Videos of the confrontation that continued inside the room circulated showing dozens of protestors sitting in chairs and on the floor shouting as the staff tried to gain control of the situation, trying to explain that this hearing was to go over proposals and testimony would be heard later in the day.
An Idaho State Police spokeswoman, Lynn Hightower, said she wasn’t aware of any pending charges against protesters. The following day she released a statement saying that “Idaho State Police personnel determined they could not have made arrests on the spot without elevating the potential for violence,” and that an investigation was ongoing into any criminal behavior “that may have occurred.” The response stands in stark contrast to 2014 when dozens of advocates pressuring lawmakers to pass LGBTQ protections were arrested for standing silently in a hallway, blocking access to the Idaho Senate chamber.
Ammon Bundy led protests at the capitol building to lead protests for the next two days after the special session confrontation, resulting in his arrest both times. State police gave Bundy a no trespass notice after he entered the state Senate chamber Wednesday morning, less than 24 hours after he was hauled out of the building Tuesday and charged with trespassing and resisting and obstructing officers. Police say Bundy was uncooperative on Wednesday and that troopers “were forced to physically remove him, take him to a stairwell, place him in a wheelchair and then into a patrol vehicle.” He was not injured during the scuffle with police.